The Kosmos Museum is named for the ancient Greek word meaning “order”, and the theme of the museum itinerary is a voyage undertaken to explore nature. When we travel, we discover new geographical terrain but we also cross into new scientific and mental territory.

The museum is housed in Pavia’s most elegant aristocratic residence, Palazzo Botta Adorno, which accomodated some illustrious figures including Napoleon and Victor Emanuel II of Savoia. The building you see now has been completely renovated and made interactive, with over 500 exhibits, multimedia games, videos, interactive activities for children and much more.

The museum was instituted by Maria Theresa of Austria in the second half of the seven hundreds and directed for almost thirty years by Lazzaro Spallanzani. It boasts one of the oldest zoological collections in the world. Some of the specimens are of great historical and scientific importance. They include a Nile crocodile (Crocodylus niloticus), a hippoHippopotamus amphibius), a shortfin mako shark (Isurus oxyrhynchus) and a common bottlenose dolphin (Tursiops truncatus).

The collections in the museum have grown over the centuries with contributions from Giuseppe Balsamo Crivelli, Torquato Taramelli, Leopoldo Maggi and Pietro Pavesi, to name only a few.

There are about 9800 vertebrates in the zoological collections. These include specimens from Spallanzani’s time, and whole collections and single specimens donated or acquired by exchange during the eighteen hundreds, or obtained in the course of scientific exploration in the nineteenth and twentieth centuries.

The ornithological section is the largest, counting about 4300 bird mounts. These include the birds of paradise donated in 1876 by Giacomo Doria, two Andean condors (Vultur gryphus) captured in Chile in 1835 by the explorer Gaetano Osculati, and specimens donated in the eighteen hundreds by the Italians Orazio Antinori, Odoardo Beccari and Luigi Maria D’Albertis.
There are about 1200 mammal specimens in the museum.

Of particular importance are an African elephant (Loxodonta africana) that arrived during Pietro Pavesi’s tenure, and the abundant collection of primates, which includes a male gorilla from the Congo.

The most interesting fish specimens are some eighteenth century dry-prepared sharks, some lungfish acquired by Pietro Pavesi and a rare coelacanth (Latimeria chalumnae) caught in the Mozambique Channel.

Of the specimens preserved in alcohol, those that deserve particular attention are the sixteenth century collection of the Dutch physician Cornelis van Hoey, the unusual dice snake (Natrix tessellata) found near Pavia in 1879, and the lizardAgama robecchii) acquired in Somalia in 1890 by the Pavia explorer Luigi Robecchi Bricchetti.Among the rodents is a rare specimen of the naked mole-rat (Heterocephalus glaber), collected in Abyssinia in 1895 by Vittorio Bottego. 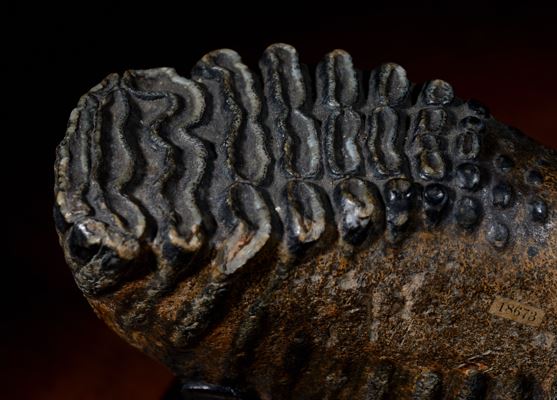 This section houses 30,000 fossil specimens and about 5000 rocks and mineral samples.
Most of the fossils are of invertebrates from all of the geological periods from the Precambrian to the Pleistocene, but there are also skeletal parts of vertebrates from the Quaternary found in the bed of the Po River near Pavia.

The most outstanding exhibits are the collection of 65 fossil fish slabs found in the Bolca fossil deposit, an original ichthyosaurus specimen (Stenopterygius quadriscissus) from the Mesozoic, the pyritized fossil of a pentacrinites crinoid and the whole skeleton of a cave bear (Ursus spelaeus) found in the Lombard alps. 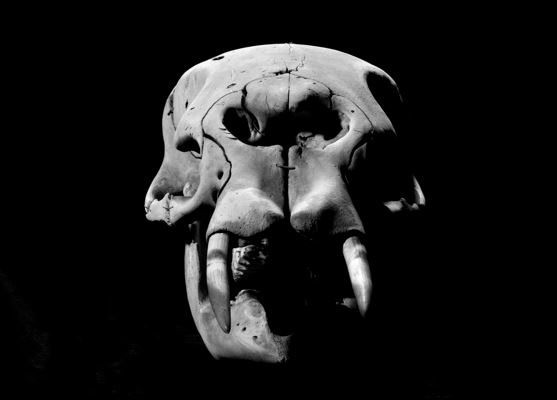 Here you will find 5000 specimens, mainly vertebrate, divided into skeletons, dry preparations and samples preserved in liquid.
The primate collection is outstanding for the number and variety of skeletons it contains. The largest specimens in the section are a white rhinoceros (Ceratotherium simum) and a fin whale (Balaenoptera physalus).

There are also two very valuable statues of mythological creatures, a deer and a horse, made in the latter half of the seventeen hundreds by Giovanni Battista Volpi, a surgeon who was one of the first professors of veterinary medicine in Milan. 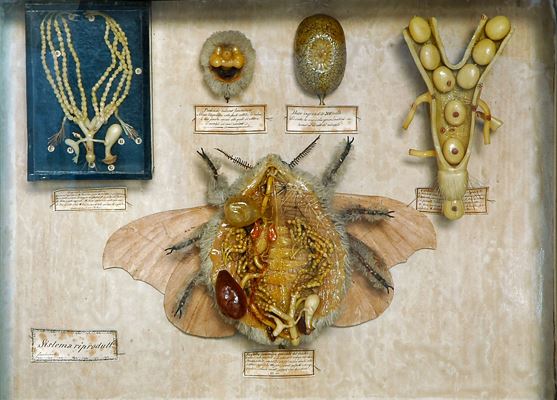 The museum has about 600 wax preparations, most of them carried out in the eighteen hundreds by Angelo Maestri, doctor, museum curator and a skilled wax sculptor.

The nine teaching charts (1853) in this section are well worth a look. They show the anatomy, the development and the diseases of the silk worm. The 500 mushroom models on display were produced to teach which mushrooms are edible and which should be avoided. 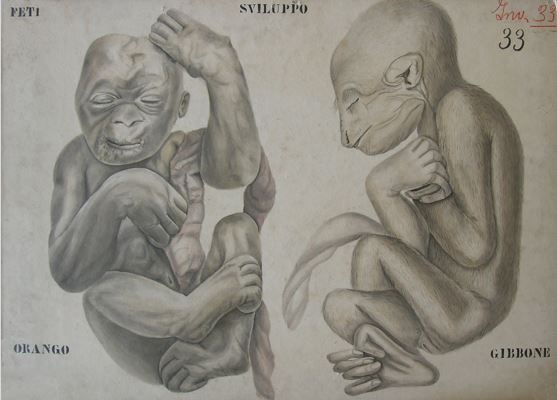 About a thousand items are shown in the two series of wall charts used as teaching aids in the nineteenth and twentieth centuries. One series consists of watercolour illustrations of zoological and anatomical subjects painted by University of Pavia professors and their assistants, and the other is a group of 200 lithographs produced in the late nineteenth century by the famous naturalist Rudolf Leuckart, whose illustrations were used for teaching purposes in many universities.